CNN is broadcasting station from the United States,And it’s a specialized news broadcasters worldwide,And it has a hard image.
Interviewer was Will Ripley that belongs to the Tokyo bureau.It was the day of the event of Funassyi has been carried out.
Q&A with Mr.Ripley was over, and then the scene switches to the studio, Little accident occurred.
When the screen is switched, Christie Lou Stout as the main caster,laughed in spite of herself.
She was turning around a system, but the program is over while blowing again words is over.
According to her Twitter, in a career of 12+years at CNN, became rattled like this on-air in it
seems to have been the first time?
Why, Funassyi was able to make a rattling CNN beauty caster? 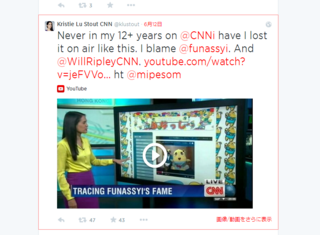 The first reason is the looks of Funassyi.His looks is similar to Dronpa to come out to
“Q Taro ghost” rather than a pear,
And like color of budgerigars is,It is a charming and though rich in unexpected as anyone can see.
It probably was no exception for Kristie an American.
The second reason can be found in the talk of Funassyi.Initially, it was planned that in the same way as the character loose other,
Funassyi does not emit voice. However, there was no money to hire a sister attend as loose character other.
Reluctantly, he issued a queer voice on stage. And, It was established as Funassyi’s voice.
Now, exquisite talk back and forth between humans and fairies pear is a big attraction of Funassyi.
Queer voice of English to answer interview CNN was very fresh even for the Japanese fans.
The third reason is the action of “Funassyi”. Often, “Funassyi” plays a head-banging like
reminiscent of hard rock.
Head-banging was born in Europe and the United States, this performance would be easily understood in the world. Funassyi has professed, he is a big fan of Ozzy Osbourne！
Gap between the head-banging and authentic appearance charming, has produced a strange comical.
It had enough power to rattle in the CNN caster.
Kristie seems to Americans who descend from Chinese and European.
Charm of “Funassyi” shows the potential to be understood United States, Europe and China. It is attention to the world of the future strategy of Funassyi !